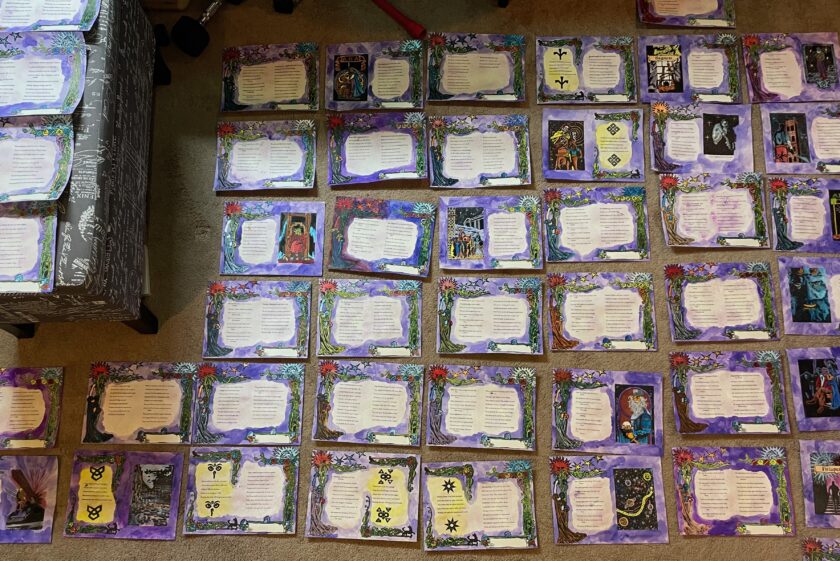 I figured today I’ll post a bit about “why a poem?” The truth is, I need planned on writing some sort of poem. When I first started writing the then unnamed book, it was all first person prose. A sort of “watcher’s view” of events in a sort of anachronism laden style. It got the idea across, but still felt more like pure fiction rather than an artifact.

At the same time, I was constructing the visual style, which was centered on a medieval meets art nouveau by way of linocut blocks. That combined with many of my inspiration sources (the Torah, the Shahnameh, the Theogony, and the Poetic Edda) led me to rethink my entire approach. I had written some version of the first few books, and so went back and started rewriting it all in iambic pentameter. I consciously chose not to rhyme, but wanted to hear the beats as I read it out loud.

That is an important part of the work for me, how it reads aloud. With the centering on the idea of a found object from another time and place, a la the Lord of the Rings conceit, it would have been an oral tale first. When I used to have to write and give presentations, that was always a key part of my process, getting the feel of the beats, when they hit, and how they hit. It changes the choices of words you use to build the rhythm, which of course makes me second guess my choice not to rhyme.